Liturgy of the Monastery of al-Muharraq

The Monastery of al-Muharraq has special peculiarities in its liturgical practice.[1] For example, the term used there for ‘hymn’ is different from all other manuscripts: luhunat, rather than alhan. There are even differences in the musical instruments, as the monks of the Monastery of al-Muharraq use, in addition to the traditional naqus (or daff) and the triangle, another instrument called the cymbal (sanj) (Moftah, Robertson, and Roy 1991).

This monastery was the only one to survive throughout the Middle Ages in Upper Egypt. Some of its monks were learned people, such as the monk Iqluda (Claudius), who was the brother of Patriarch Gabriel IV and took part in the consecration of the myron in the year ad 1374 (Youssef and Zanetti 2014: 22).This monk ordered the copying of important manuscripts, among them the Philocalia (Khalil 1993) and the interpretation of the Apocalypse by Ibn Katib Qaysar (Ms 52 Theology—Monastery of St. Antony, dated am 1117 (ad 1401); the manuscript was copied in the scriptorium of the Monastery of St. Antony).[2] Another example is the monk Girgis, who was the abbot of the Monastery of al-Muharraq (Anba Gregorius 1968: 194; Dayr al-Muharraq 1990: 119) in the late eighteenth century and copied the critical edition of the four gospels of Ibn al-‘Assal,[3] now preserved in the Coptic Museum (62 Biblica).[4] (This means that the readership in the monastery was able to appreciate such an important book.)

There are also some oral traditions that have never been recorded before, and that are unique to this monastery. Among them, we can mention that when the priest blesses the people, he turns to his left (which is the right of the altar); the same can be said for the opening of the curtain of the altar, which is also done from the right.[5]

R.F.G.Viaud studied the procession of the Feast of the Cross and noted several peculiarities, such as a station near the tomb of Musa or Salome (Viaud 1967-68).

In a previous article I highlighted the importance of the doxology of the consecration of the sanctuary of the church of al-Muharraq (Youssef2009b). In this chapter I will highlight some other texts related to the monastery:

The liturgy in this monastery is characterized by four features:

Hymn for the Eve of the Nativity

It is important to mention that the hymn, “Your Star Appeared,” suits the context of Nativity Eve, rather than the consecration of the myron. Matthew chapter 2—the visit of the Magi to Christ—is read at the Feast of the Nativity in the Coptic Church and this hymn is the last to be sung during communion on the Eve of the Nativity, as preparation for the con­gregation for the advent of Christ, as if the Magi were advancing toward Bethlehem. The ideas treated in this hymn resemble those of the Nativity hymn composed by Romanos Melodos (Youssef 1998—99).

O.H.E. Burmester was the first to attract the attention of the scholarly world to the importance of this manuscript in his pioneering study on the Turuhat (Burmester 1938: especially 175). We will study Manuscript 323 Lit. Coptic Museum (fol. 161), which contains the commemoration of 6 Hatur and the Arabic tarh.[6] 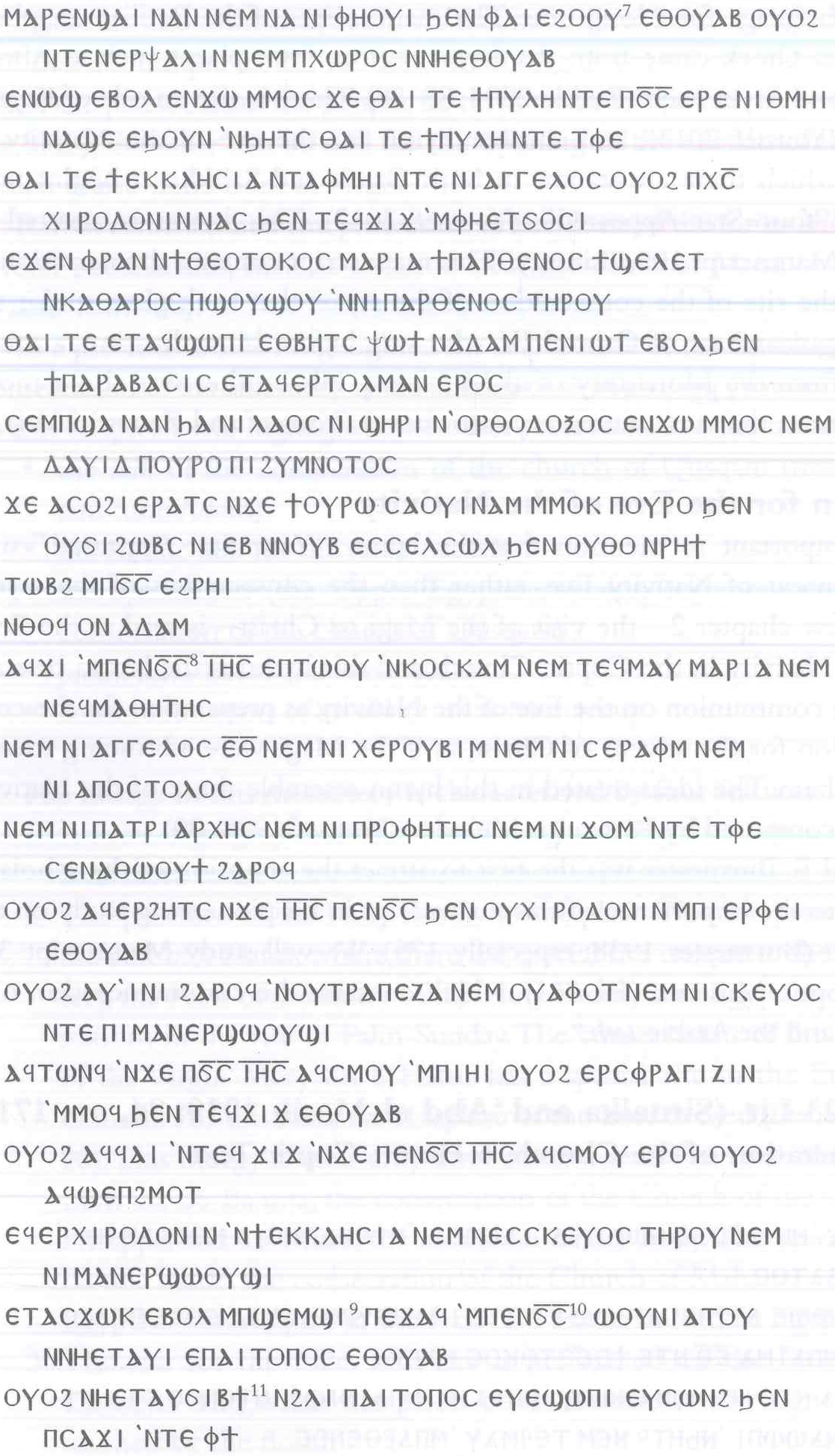 The sixth day of Hatur, the consecration of the church of Qusqam, tune Batos.

David the psalmist said: “How amiable are your dwellings, O Lord of hosts our God.”[8]

Let us rejoice with the heavenly beings on that holy day, and let us praise with the choirs of saints,

This is the true church of the angels and Christ consecrating it with His sublime hand,

after the name of the God-Bearer Mary the Virgin, the pure bride, the pride of all the virgins.

Through her is the salvation of our father Adam from the transgression which he dared (to do).

It is worthy for us, people, the sons of the Orthodox, to praise with David the king, the praiser.

“The queen stood at Your right, O King, in clothing wrought with gold (and) adorned in variegated manner”[10]

Pray to the Lord for…

And also the Adam tune:

Lord Jesus rose and blessed the house and signed it with His holy hand.

And our Lord Jesus lifted His hand and blessed it and gave thanks. He consecrated the church and its all instruments and the altars.

When the service was finished, Our Lord said: “Blessed are those who come to this holy place.

And whoever will change anything in this place will be bound by the word of God.”

When our Lord Jesus Christ was born from the pure Mary, in Bethlehem, Magi came to Jerusalem when the star appeared to them. When Herod was informed and wished to kill Him, think­ing that He was a worldly king, Herod searched for the Child to kill Him. An angel of the Lord appeared to Joseph, ordering him to take the Child and His mother and to go to Egypt. Joseph did according to what had been ordered by the angel of the Lord and took the Child and His mother and came to Egypt and from there to Qusqam.

They dwelt in it till the death of Herod, and the angel of the Lord ordered Joseph to return back with the Child and His mother to Jerusalem. When the Lord accomplished His economy on the earth and was baptized, chose His disciples, did miracles, was crucified, and was buried and rose from the dead and ascended to Heaven, He sent His Holy Spirit upon His pure disciples on Pentecost. He sent them to preach His glorious name in the whole world and made the nations return to the knowledge of the truth. Afterwards, our Savior assembled with His pure mother and His disciples in this pure mount and consecrated the house wherein He dwelt with His pure mother Mary on that holy day which is the sixth of Hatur.

Let us rejoice, be happy and glad, O all faithful, for this is the day of the Lord, and let us say with the psalmist David: “This is the gate of the Lord wherein the righteous shall enter.” Truly, my fathers, this holy house is like Jerusalem. This is the house of the Lord wherein He dwelt in this expatriation. This is the harbor to those who will take refuge in it. We, the poor sinners, we beseech the merciful Lord, through the intercession of His pure mother, Mary, to have mercy upon us and forgive us our sins and to order our Eves to what pleases His goodness till our last breath.

While the psali Batos stresses Biblical allusions, especially the psalms, the psali Adam highlights the liturgical aspect, showing not only the consecra­tion of the church but also consecration of all the hturgical instruments of the altar. The text clearly expresses the prayers of thanksgiving and the sign of the cross. The same wording also occurs in the Synaxarion.

On that day also the Lord Christ assembled with His disciples in the mount of Qusqam and consecrated the sanctuary and the church with His pure hands. He signed the Church and the altar in the name of the Virgin Mary, His mother, and by the hand of the angels Michael and Gabriel. Our good Saviour consecrated the vessel of water according to what was testified by father Theophilus, the patriarch, and the father Cyril. And this place will not perish till the end of ages according to the promise of our Lord Jesus Christ. May the intercession of all be with us! Amen.

The Basset edition omits the italicized text (Basset 1907: 255 [179]). It seems that the consecration with water was a practice of Upper Egypt (cf. Coquin 1993b: especially 50 n. 61). The text refers to the patriarchs Theophilus and Cyril. 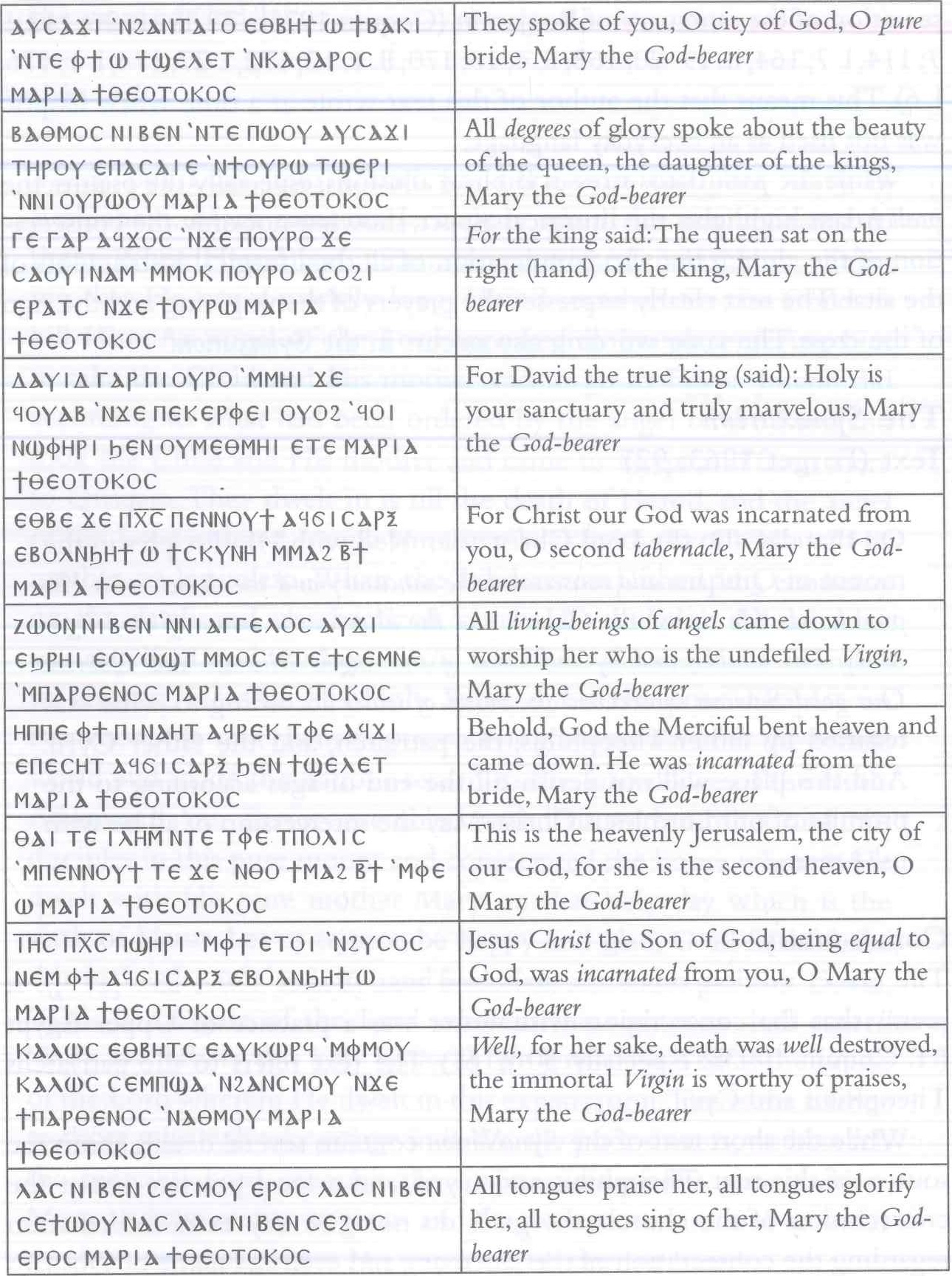 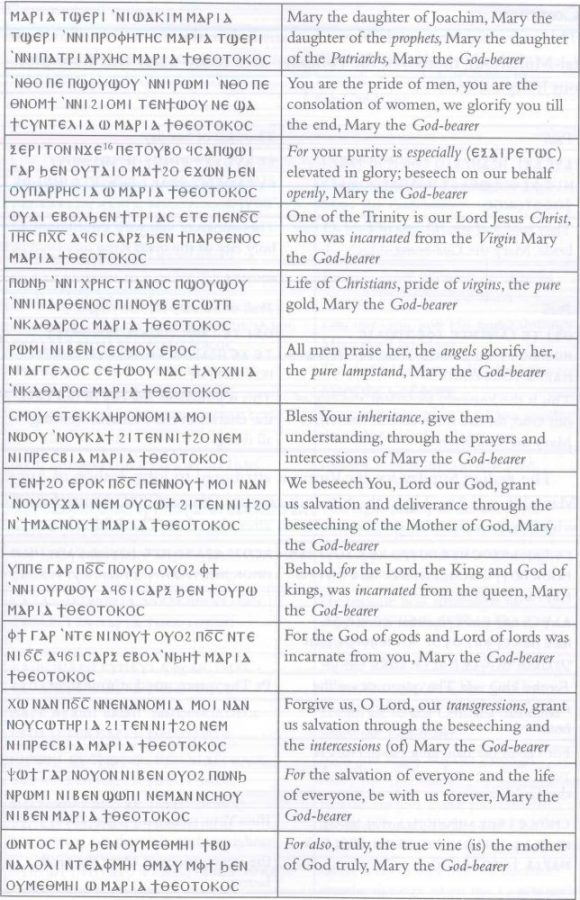 This psali is anonymous. I did not find any link to the monastery of Qusqam (al-Muharraq); moreover, the compiler used ready-made text from previ­ous liturgical texts:

The psali of Sunday for the Virgin is attributed to John, bishop of Asyut, Manfalut, and AbuTig in the fifteenth century (Youssef2003;Youssef2008), which means that this psali was written after that date. The biblical text: 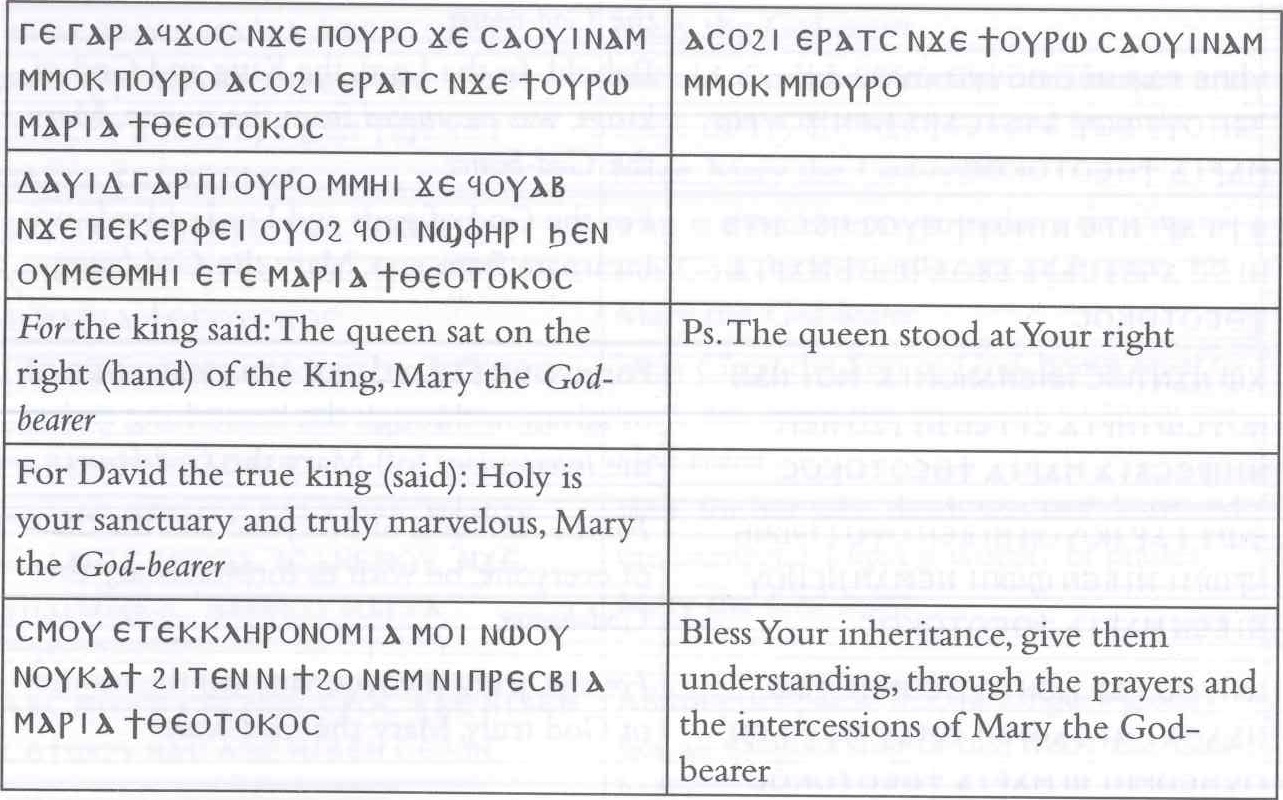 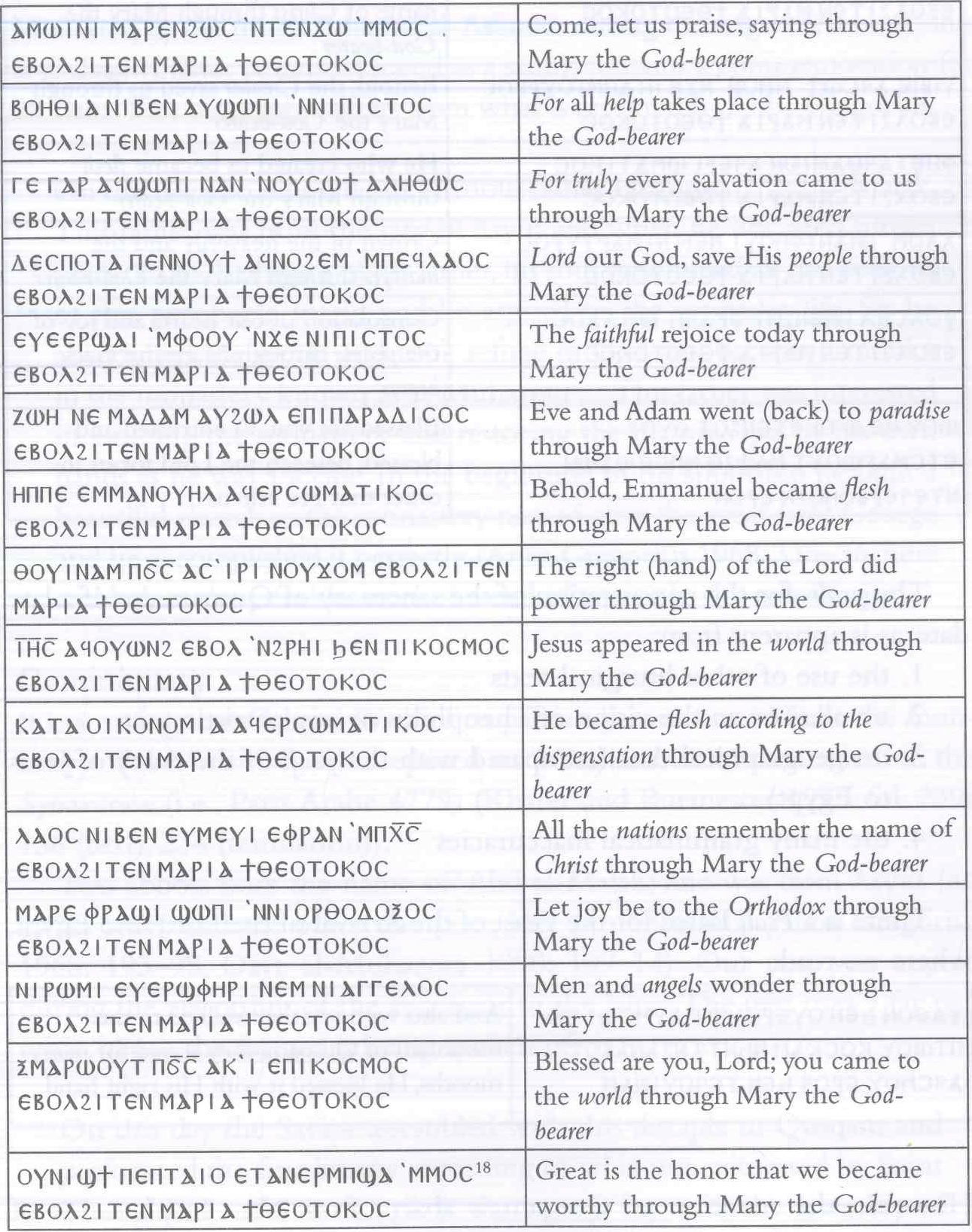 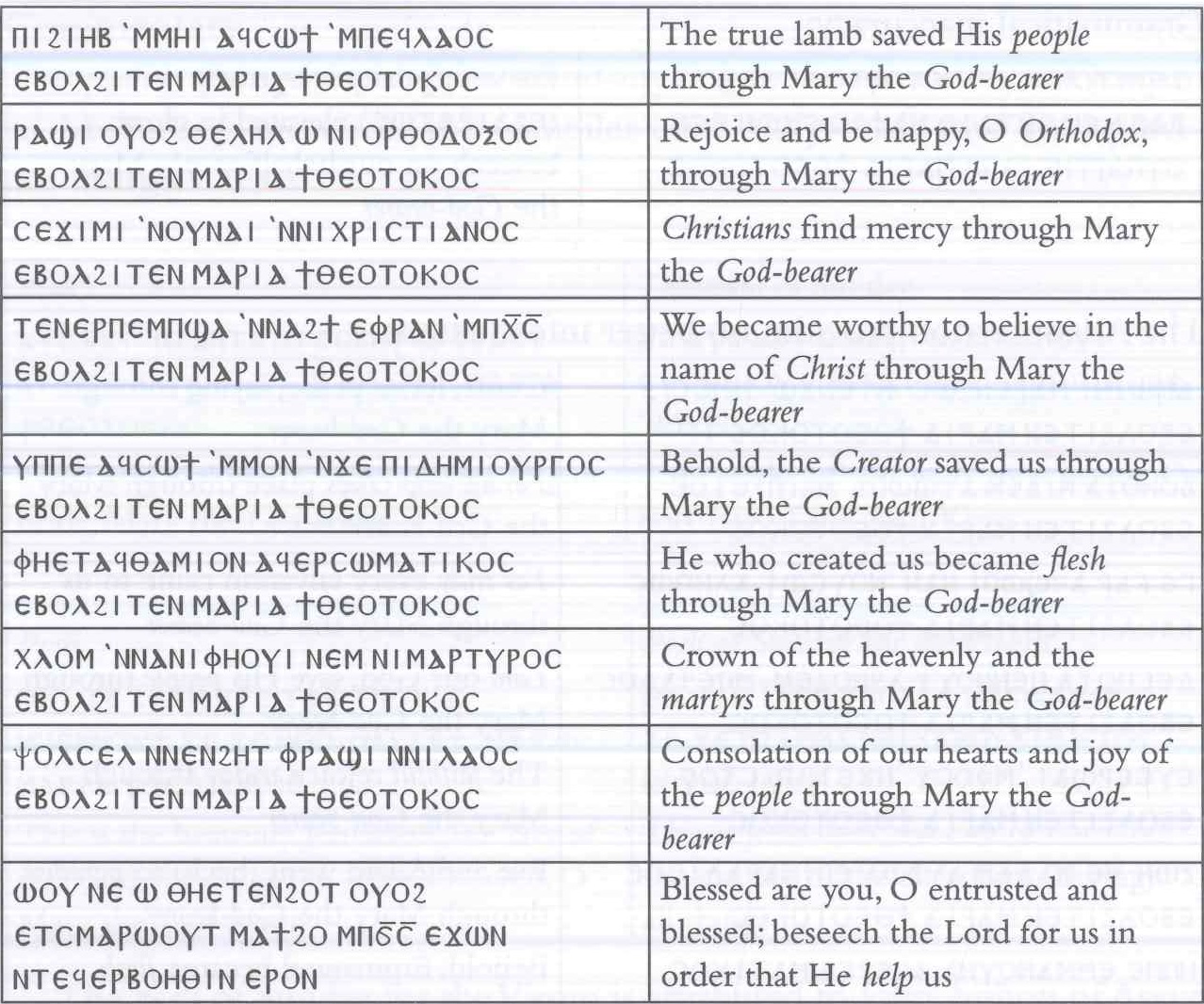 The psalis for the consecration of the sanctuary of Qusqam are of a late date, as is apparent from:

There is a Psali Batos for the Feast of the Arrival of the Lord into Egypt, where we read:

However, the mention of Qusqam is absent from the Antiphonarion of Upper Egypt (Cramer and Krause 2008: 319).

Commemoration of an Abbot of al-Muharraq

I have identified so far three manuscripts from the monastery of al-Muharraq that are kept in the Bibliotheque Nationale de France: Paris Arabe 4779,4780, and Paris Copte 123.1 have already published the doxology for 6 Hatur con­tained in Paris Copte 123 (Youssef 2009b).The manuscript Paris Arabe 4779 (Troupeau 1974:30) (fol. 75v—77r), which was copied in the Monastery of al- Muharraq by the monkYuhanna al-Adimidi during the reign of Abbot Bulus al-Dalagawi (later commemorated as a saint), contains a commemoration for 28 Baba. This biography differs from what is reported by Anba Gregorius:

On this day also reposed our virtuous father Hegumen ‘Abd al-Malak. This father was from the city of Asyut and when he was aged fifteen years old in the house of his father, his soul renounced all the delights of this perishable world and he aspired to the monastic life. So he abandoned the world and took refuge in God and became a monk* in the monastery known as al-Muharraq .. .This father was interested in building the monastery and restoring the manuscripts by his own hands as he was a scribe.

In the beginning of his abbotship he built a beautiful church in the monastery named after the great saint George and he accomplished it perfectly. (Anba Gregorius 1968:335—36; here and below, the asterisks mark the end of a page in the manuscript)

On this day the Savior assembled with this disciple in Qusqam and performed the first liturgy according to what was witnessed by Saint Theophilus and Saint Cyril. It was a great day with the assembly of our Lord* with his mother and his disciples, and he consecrated this place with his sublime hand, to whom is the glory forever and may his mercy endure for eternity. Amen. (6 Hatur, fol. 84v—85r)

The Sahidic version of the Synaxarion according to the manuscript Paris Arabe 4869 commemorates on 20 Kiyahk the martyrdom of Elias, bishop of al-Muharraq during the time of Arianus. His body was hidden until the time of our father Constantine bishop of Asyut, so his body was translated to Asyut, and when Qusiya (al-Muharraq) was rebuilt, the saint appeared to a merchant asking him to return his body to Qusiya. When the mer­chant arrived in Asyut, he took the body and nobody prevented him, as the saint had promised. According to the Synaxarion, his body is kept in the Monastery of al-Muharraq (Forget 1963: 345—47).

This commemoration brings up several points.

[1] I would to thank all who helped with this chapter, especially Gamal Hermina for the manuscript from the Coptic Museum, and the monks of al-Muharraq Monastery, Fr. Angelos, Fr. Beniamin, Fr. Ammonius, and the other monks.

[2] I would like to thank my friend Jacob Askern for this information.

[5] I would like to thank Fr. Beniamin al-Muharraqi, who drew my attention to these traditions.

[7] All English translations are by the author.

[11] Only in the early twentieth century did Pope CyrilV ordain some abbots as bishops.