Father Matta Al-Miskeen was born Youssef Iskander in the city of Banha on 20 September 1919, received a B.Sc. in pharmacy from King Fouad I (now Cairo University) University in 1944. He first worked at a pharmacy in Alexandria, and then established his own pharmacy in the city of DAMANHUR. In 1948 he felt a calling to monastic life and obeyed immediately; sold everything he owned, distributed the money to the poor and kept nothing for himself except the amount of a one-way train ticket that will convey him to the closest station (Maghagha) to the monastery. He especially chose DAYR ANBA SAMUIL OF QALAMUN (Monastery of Saint Samuel the Confessor) because it was the poorest among the monasteries of Egypt and the most isolated one from urban areas. This was also according to the pastoral guidance of his spiritual father, Hegumen Mina al-Mutawahed who at the time was the abbot of Dayr Anba Samu’il of Qalamun, and in 1959 became Pope CYRIL VI.

At Dayr Anba Samu’il of Qalamun, Youssef Eskander was tonsured as monk, by the name of Fr. Matta Al-Miskeen and used to spend his nights in prayer, doxology, and studying the Holy Bible in great depth. During that time, he began to write his first and most important book, Hayat al-Salat al-Orthodoxiya (The Orthodox Prayer Life). But, due to the extreme paucity of resources at the monastery, his health quickly deteriorated, so he was compelled by a friend in 1951 to move to DAYR ALSURYAN (Monastery of Saint Mary Deipara) at WADI ALNATRUN.

At Dayr al-Suryan, though against his will, he was ordained to the priesthood. He lived as a hermit in a cave in the desert around 3.3 km from the monastery premises. After a short time, he was appointed by the ABBOT, Bishop Anba Theophilus, to guide the monks spiritually, especially the novices. Henceforth, he started a leadership role in the monastic revival in the Coptic Orthodox Church that took place in the middle of the twentieth century. He drew monasticism to its originality, and reinvigorated the ethos of the early ascetic fathers through his severe asceticism, and profound spiritual life. He revitalized the practice of fatherhood and discipleship, nurturing the young novices and guiding their progress in the monastic life. Like the ancient vivid monasticism at SCETIS, this monastic revival in the wilderness of Scetis attracted young Coptic intellectuals (members of the Sunday School movement) who gathered around him, forming the first monastic community in the modern era under the discipleship of one spiritual father, as it was in the beginning of monasticism. While still living in his cave, he pastored this flourishing monastic community for two years (1952-1954).

During that time at Dayr al-Suryan, he completed his first book, Hayat al-Salat al-Orthodoxiya (The Orthodox Prayer Life), which was initially published by the monastery in 1952. In 1968, he revised the book, expanded the contents, and published the new version through Beit al-Takris, (House of Consecration), Helwan. This profound book has been translated into several languages including French (1997) and Italian (1999). An English version was published by St Vladimir’s Seminary Press, NY in 2002.

In 1954, Pope YUSAB II, Patriarch of Alexandria (1946-56), appointed Fr. Matta as his deputy in the city of Alexandria – the center of the apostolic see of St Mark – after raising his rank to hegumen. Fr. Matta’s mission in Alexandria that amounted to fourteen months (March 1954-May 1955) left a robust spiritual impact on the faithful, both clergy and laity. Due to some administrative problems, Fr. Matta submitted his resignation to the Pope and chose to return permanently to the monastery, refusing the many attempts by the people and the COMMUNITY COUNCIL to let him return. Fr. Matta, hence, returned to his cave at Dayr al-Suryan to continue his monastic life in solitude and tranquility. And, many sought the monastic path under his guidance.

Seeking more isolation and solitude, Fr. Matta left Dayr al-Suryan in June 1956 and returned to his original monastery (Dayr Anba Samu’il of Qalamun), where he was followed by his new disciples. He remained there three years, during which time he was nominated for the first time to be Patriarch after the death of Pope Yusab II in November 1956. In August 1960, Fr. Matta and his disciples moved to the desert of WADI AL-RAYYAN (FAYYUM province), an isolated area in the wilderness, fifty kilometers from the nearest populated village. There, they lived in caves dug by their own hands in the mountain hills, and stayed there about nine years in an austere life that to a great extent resembled the lives of the early monastic Fathers. Despite the fact that they were completely detached from the world, their monastic community increased. During this period, Fr. Matta wrote many spiritual books that are still popular and influential among the Christians in Egypt, the Middle East, and the Western world.

In May 1969, Pope CYRIL VI (1959-71) asked Fr. Matta to move with his monastic community (12 monks) to DAYR ANBA MAQAR at Wadi al-Natrun – a calling that was totally supported by the Head of the monastery, Metropolitan Mikhail of ASYUT (1946-2014) who entrusted Fr. Matta with the mission of restoring the ancient monastery from its deteriorated condition, and reviving the monastic life there, which was about to be extinguished with only six elders left. Since then, Dayr Anba Maqar underwent a progressive renaissance, not only in architecture and landscape in which the area of the monastery expanded six times, but also in monastic revival, with the number of monks amounting to one hundred and forty in 2017. The monastery became a pilgrimage site to visitors not only from Egypt, but also from all over the world.

At Dayr Anba Maqar, we find that Fr. Matta organized the daily monastic life, not with rigid monastic rules, but with a flexible guidance inspired by the Holy Spirit to suit each particular monk in accordance with the circumstances of each day. He also managed to implement both coenobitic and eremitic forms in the monastery, for he designed each cell in a way that made it possible for monks to abide in seclusion. (A panoramic view of the monastery is depicted in the following figure.) 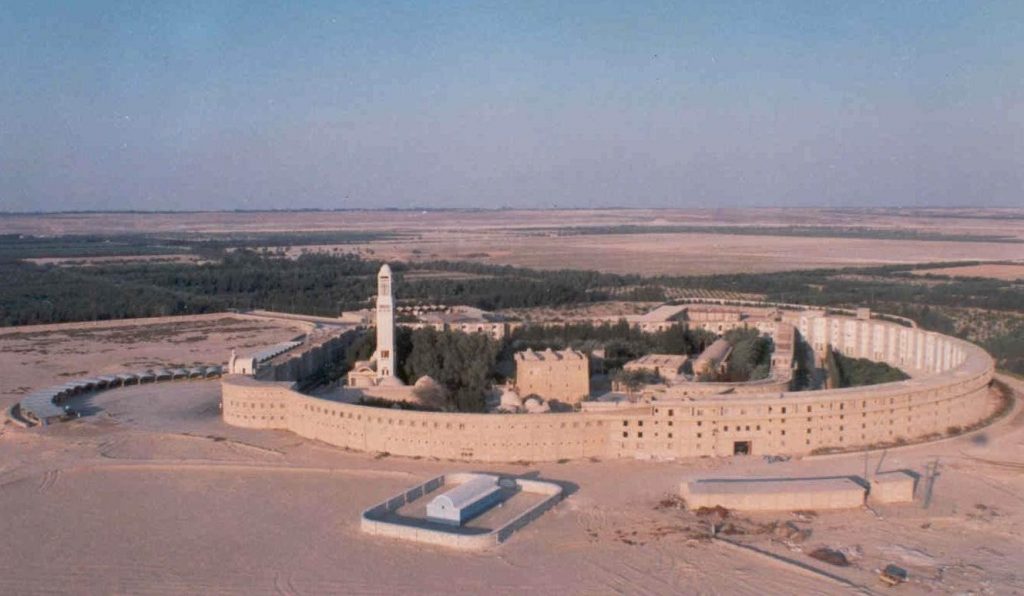 Before the difficult events of September 1981, President Anwar al-Sadat (1970-1981) summoned Fr. Matta to discuss matters that affect the Coptic Church. In that meeting, Fr. Matta succeeded in persuading the president to change what he intended to do, and not to put Pope SHENOUDA III (1971-2012) on trial, the plan that had already been announced in the newspapers. When al-Sadat disclosed to Fr. Matta – before the media – his plan to arrest and imprison a number of Muslim and Christian religious leaders, Fr. Matta asked him not to carry out any political measures that could appear disgraceful to Pope Shenouda III, and Al-Sadat agreed. Moreover, when the president disclosed his intention to arrest many of the current leaders of political parties, Fr. Matta asked him to cancel this plan also, but he was informed that the orders of implementation were already given and there is no ability to stop it now. In 1984, Fr. Matta sent a letter to President Mubarak (1981-2011) imploring him to lift the political sanction against Pope Shenouda III who was confined in DAYR ANBA BISHOI from 5 September 1981 to 3 January 1985.

Fr. Matta was a prolific author; he wrote more than 180 books in addition to the many articles that were published in journals and periodicals. From the time he arrived at Dayr Anba Maqar in 1969, Fr. Matta began to compose comprehensive series about the beginnings of Coptic monasticism in Egypt. The first book in the series was al-Rahbana al-Coptia fi ‘Asr Anba Maqar (Coptic Monasticism at the time of St Macarius), a volume in 800 pages. In 1990, he turned to Biblical hermeneutics, and began to compose spiritual and theological commentaries that include academic explorations on some of the New Testament books, which was published in sixteen volumes. He started with the four Gospels, beginning with the Gospel of John in three volumes (totaling 2612 pages). Then, he wrote commentaries on the book of Acts, several Pauline Epistles, First Epistle of John, and he concluded this series with the First Epistle of Peter, which he finished shortly before his death.

Furthermore, he authored a large volume on the life and theology of St ATHANASIUS I of Alexandria, a volume on the mystery of the EUCHARIST, and a volume on the life and theology of St Paul the apostle. Moreover, Fr. Matta addressed many other topics, such as liturgical theology, in which he wrote books on Coptic Psalmody, Coptic liturgy, liturgical fasts, and liturgical feasts. He also wrote on pastoral and social issues, such as the book titled, al-Kanissa wal-Dawla (Church and State), in which he addresses what he calls “persecution complex”, and defines the proper boundaries of the relationship between the church and the state, highlighting the danger of interference of politics in religious affairs and vice versa. He also tackled some of the contemporary social and political issues in Egypt. For example, he wrote from November 1961 to January 1962 a series of five articles titled, “Socialism from a Christian Perspective” in the weekly newspaper Watani. In June 1967, following the setback of the “1967 war” with Israel, he wrote a book titled Ma Wara’ Khat al-Nar (Beyond the Line of Fire) and a research work titled Mina’ Eilat wa Sahra’al-Naqab (The Port of Eilat and Negev Desert). On the occasion of Camp David Accords between Egypt and Israel (September 1978), Fr. Matta wrote an article on this peace agreement.

The writings of Fr. Matta are characterized by profound spiritual insights that touch the readers’ heart and lead them towards the divine and mystical life. Chiefly, this is what motivated the Coptic youth to read his books with eagerness and great consideration. This is also what prompted many Christians from different nations to pay attention to his writings and study them. Numerous works by Fr. Matta have been translated to English, French, German, Italian, Russian, Greek, Spanish (with its different dialects), Polish (with its different dialects), Ukrainian and Hungarian. On the occasion of the ten-year commemoration of Fr. Matta (2016), an ecumenical conference was held at the Catholic Monastery of Bose, Italy, in which many theological scholars from around the world spoke about the spiritual legacy of Fr. Matta and his writings. Currently, his works are being taught in several universities and theological schools that belong to different Christian denominations. Fr. Matta did not stop writing even when he was eighty-seven years old and bed-ridden, where he published four parts of Ma’ al-Massih (With Christ) series, in the form of contemplative biblical articles for exhorting and encouraging the faithful. Finally, a few months before his death, he wrote his last book Ma’ al-‘Adra’ al-kedissa Maryam (With the Holy Virgin Mary).

Fr. Matta carried the flame of spiritual and theological enlightenment in the church, enkindling the souls with pure and profound mystical experience, with a faithful commitment to the originality of the Biblical roots and the teachings of the Orthodox Church Fathers. Though traditional, he presented his insights in a contemporary way appropriate to the mindset of the present era. He enlightened generations with spiritual and theological teachings that are founded on the Biblical and Patristic traditions. He exposed the modern reader to the broad horizons of Christianity and impressed in his soul the mystical experiences of the Christian life. Such influence was nourished and sustained by his holy life that testifies to the credibility and fidelity of his teachings.

On 8 June 2006 AD (1722 AM), Fr. Matta, the holy Abbot of Dayr Anba Maqar, departed to the heavenly glories; he was laid in a cave carved in the hill outside of the monastery, a location that was chosen by him, and the cave was completely sealed as he previously commanded.

Works by Fr. Matta in the English language: