The aim of this study is to correct the common notion that the architec­tural design of the typical Coptic Orthodox church either has a cruciform plan or is in the form of Noah’s Ark, which reflects a lack of awareness and lack of study of the rich and diverse Coptic architectural heritage through­out the ages. It will be concerned primarily with the categorization of the historic churches of Middle Egypt, in the region from Oxyrhynchos to Dayr al-Ganadla. This categorization will be based on the nave’s forma­tion and the roofing system, excluding cave and rock-cut churches. Basic architectural elements and one or more distinctive examples of each type will be illustrated.

With respect to the design of the nave and its roofing system, the archi­tectural typology of historic Coptic churches in Middle Egypt can be summed up by seven types, as follows:

a. This type is also known as the ‘twelve-dome church,’ because the sanctuary area is covered with three domes, in addition to the nine above the nave. Nevertheless, here the domes have neither the same height nor the same shape. The Church of Dayr Anba Sarabamun at Dayrut al-Sherif (fig. 28.16) and Abakir andYuhanna Church at Manhari (fig. 28.17) are examples of this type.

b. This type is similar to the previous one, with the addition of an inner narthex. An example is Anba Athanasius church at Dayr al-Zawya (fig. 28.18).

c. Another variation of the nine-dome nave is characterized by the pres­ence of an exo-narthex, for example, in Dayr al-Muharraq in al-Qusiya (fig. 28.19) and St. Mary Church at Delga, Dayr Muwas (fig. 28.20).

Churches with Nave Roofed with a Combination of Domes and Vaults

Nave consisting of a central dome and four umbrella vaults perpendicular to it, where each of the half domes at the end of the vault is based upon a half-cylindrical apse containing a small niche This type of church can also be described as a ‘tetraconch church,’ with a central dome surrounded by four half-umbrella vaults, such as the church of Dayr al-Dik (fig. 28.21). This church is considered a perfect bi-axial design. The church’s only altar lies in its northeastern side. In the four corners of the church there are four square chambers, two of which are connected to the sanctuary and serve as sacristies (diakonia); these chambers were probably roofed with domes.

Nave consisting of three central domes extending in the east-west direction, lying along the nave’s axis of symmetry, in front of the main sanctuary

The three domes are flanked on each of the northern and southern sides by three umbrella vaults, each ending in a half dome. The dome situated directly in front of the sanctuary is considerably larger than the others. There is a vaulted exo-narthex on the western side of the church, such as at the Church of Dayr Abu Hinnis, south of Antinoe (fig. 28.22). This church originally had one sanctuary, but then the first khurus was extended northward, creating an additional sanctuary.

Churches in this style have a large central dome that lies in the middle of the square nave, carried on four columns with a round, square, or cruciform cross section. The central space is surrounded by a U-shaped balcony (on the northern, west­ern, and southern sides). Above the balcony, there are four small equal domes, one in each of the nave’s cor­ners. In between these domes, there are four rectangular spaces, each covered with a vault or flat ceding, resulting in a bi-axial design.

On the ground floor, there is often an exo-narthex enveloping the nave on the outside (on one, two, or three sides) and adding more space to the balcony, in addition to the environmental and aesthetic benefits resulting from it. There is always an inner narthex, in order to straighten the external form of the building. The sanctuary area extends through the whole width of the building, and this type of church usually has three altars. The exterior of the building is a clean-cut rectangle, free of any projections.

‘Transverse churches’ are also known as ‘Akhmim churches,’ where the width of the church building is larger than its length—that is, the nave’s extension in the north—south direction is larger than its east—west exten­sion. For this reason, they are also known as ‘short churches .’These churches are divided into two khuruses, and usually have multiple parallel/adjacent altars and a nave with multiple domes, the highest of which is the dome opposite the main altar in the central bay.

These churches are often extended northward and southward by adding to each side two bays and a sanctuary, or diakonia.The sanctuary area con­sists generally of three parallel half-cylindrical sanctuaries, roofed with three domes.

In Dayr Anba Hermina at ‘Ezbet al-Aqbat, al-Badari, probably built in two or three phases, one can easily identify that the first phase included a semicircular sanctuary, centrally located with respect to the original design (fig. 28.26). 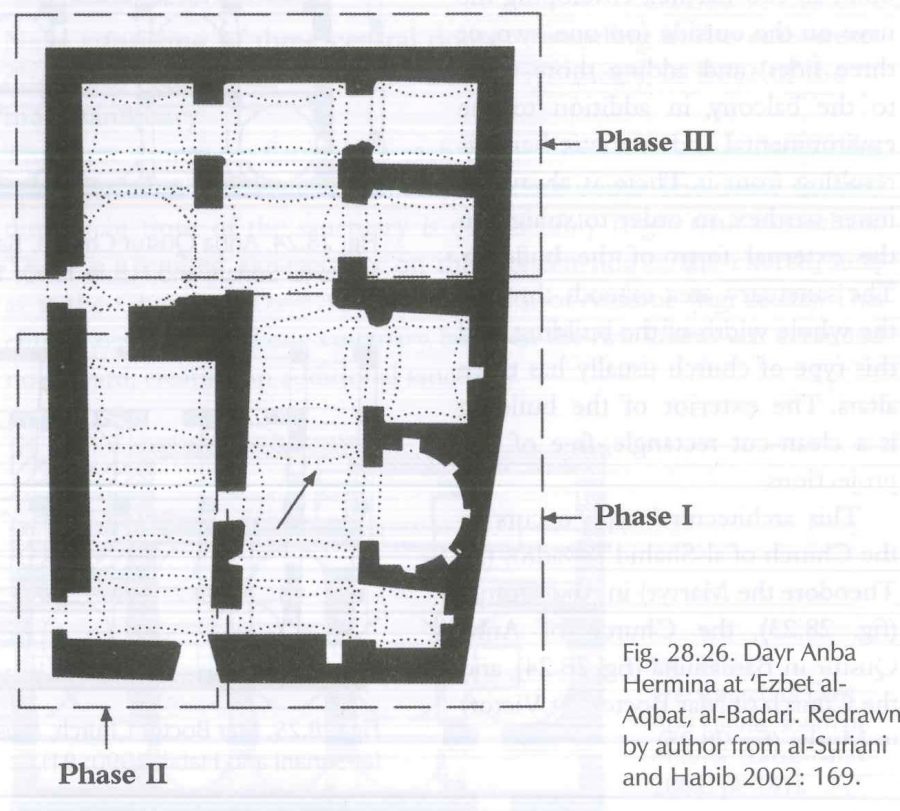 These churches have a wide middle nave running east to west, are high- roofed with a wooden truss and clerestory windows, and are flanked by three aisles on the northern, western, and southern sides. The sanctuary area is of great depth, and there is usually a wooden dome known as the ciborium (or baldachin) above the altar, carried on four marble columns. The sanctuary area is characterized by the presence of a large synthronon (thronos).There is a mezzanine floor (gallery) above the three aisles, over­looking the nave.

The basilica plan was greatly influenced by the design of the hypo­style hall in ancient Egyptian temples, for example at Karnak temple, with its high and wide central nave, flanked by short and narrow side aisles, in addition to the clerestory windows admitting natural light­ing and ventilation for the nave. 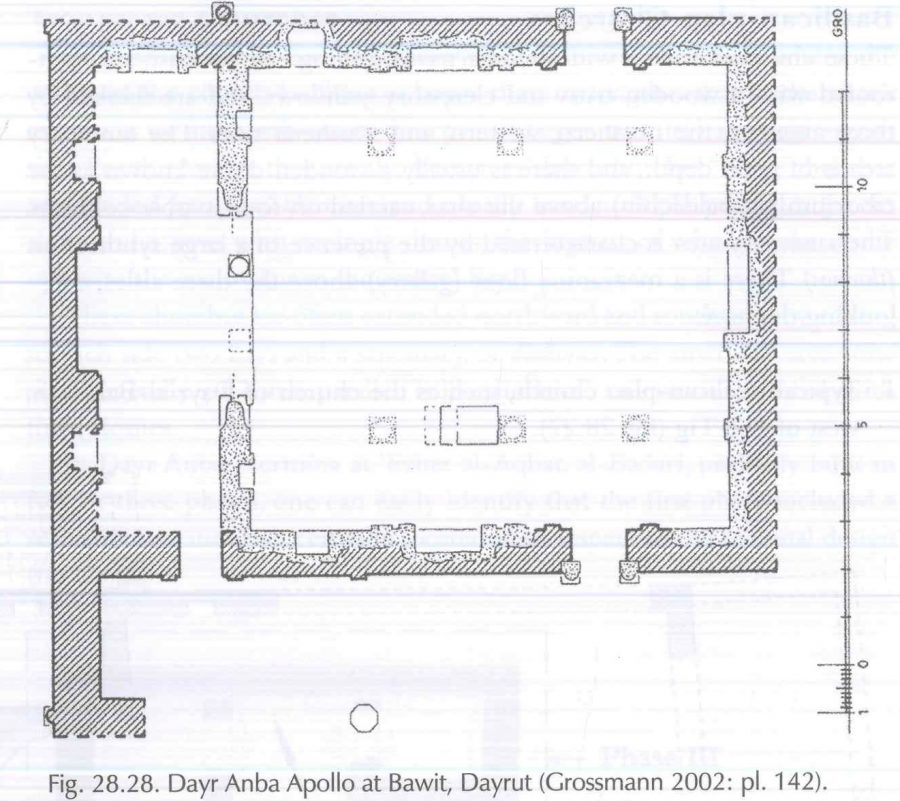 The nave was once roofed with a brick vault and is currently roofed with a flat wooden ceding. There are three aisles around the nave, such as at the church of Dayr Abu Fana in Mallawi (fig. 28.29). There, the current sanctuary lies within a large eastern apse, of nearly the same width as the middle nave, with a fresco depicting the largest Iota cross in all of Egypt. The sanctuary and the khurus form together an unequal triconch, because the eastern apse is much larger than the two apses of the khurus.

The monastery is also known as the Monastery of the Crosses, due to the fact that, in addition to the large Iota cross, there are other wall paint­ings depicting different sizes and forms of crosses.

This architectural type also apphes to the basilica of Kom Namrud, west of Samalut (fig. 28.30).

A long central nave, running east to west, flanked by two narrow aisles on the northern and southern sides, with a separate defined khurus and a triconch sanctuary, but without a return aisle Dayr al-‘Izam, Mount Durunka (fig. 28.31) is an example of this type.

Basilican-plan Churches with Transepts (Cruciform Plan) This type of church comprises a large central nave, flanked by three aisles, one of which is the return aisle. The central nave is about forty-three meters long and not more than fifteen meters wide. Two semicircular tran­septs protrude from the church building, each of which includes a large middle aisle flanked by two narrower ones, and ends in a semicircular apse with an inner diameter of twelve meters, which is equal to the diameter of the eastern apse, such as at the Basilica of al-Ashmunayn (fig. 28.32).

The external form of the Basilica of al-Ashmunayn is rectangular, and the apses cannot be discerned from the outside. It is distinguished by the presence of an inner narthex as well as an exo-narthex, and also by its three equal apses. The total inner length of the central eastern-western nave (excluding the depth of the eastern apse) is nearly equal to the inner distance between the northern and southern walls of the transepts.

The Ruined Churches of Manqabad

These two chapels, recently discovered by the Sohag University expedition in the northeast of Asyut, do not fit into any of the previous categories, being unique in their architectural formation (fig. 28.33). Each has a defined khurus and an oblong nave with no columns or other form of support. It is difficult to determine the roofing system in their current state; however, the short six-meter span of one church could have had a brick vault running in the eastwest direction, and the 7.8-meter span of the other church sug­gests a wooden truss.